As I grow in this salvation which I do not deserve, I am struck again and again by how some of my most basic, fundamental, assumptions have not always proven to be true.

As a pastor, the greatest mistake I believe I have ever made was the mistake of using the Bible as if it was simply a tool; a resource for “doing the ministry.”  “Take two Bible verses and call me in the morning” is NOT Christian counseling.  Throwing a proof-text at someone who needs one, who has a question, has a crisis, does not necessarily solve their issue.  The Bible is not a collection of verses for various situations in life.  It is the ongoing story of the grace of God in history AND in the present while looking to the future consummation of all things.  This “story” is not to be understood the way many today understand the term, as simply a synonym for “fiction.”  It is God’s story and one of it’s most salutary characteristics is how it draws us into that story.

One of the reasons I haven’t been posting much in my blog in recent months is because I have been spending more time, more necessary time,reading the Scriptures again.  In some cases, I listen to them through the audio feature on my handy-dandy Bible app on my iPad.  In some cases, I simply read (especially the Bible narratives).  In all cases, I have been trying to empty my mind of present concerns so as not to read my particular concerns into a text.  I am trying to let it work the other way around.  I may be reading the Scriptures, but in truth, they are reading me.  They are telling me what I need to hear and my “silence of the soul” is a great help in regard.  As God’s story has its way with me, I find that there are answers to the present concerns of life.  It’s just that those concerns aren’t the factor driving me to the Scriptures.  The Scriptures are, in their own enjoyable way, driving me back to those concerns and offering real peace.

You can study the Bible as if it was so much data.  Lutherans, (if I may humbly engage in a little gentle admonition), are often quite guilty of this.  We’re not saved by how well we’re going to do in a Bible Trivia contest.  It’s good to “know the Bible,” but it’s even better to have a Word which continues to instruct, a Word we continue to hear.  The risk of “knowing the Bible” is the risk of using it for self-validation.  The sinner in me doesn’t need such validation.  It needs God to look at me through the Word, to show me who I am through His Word, to read me like a text, and then show me a Jesus who speaks to me where I am.

I don’t write the above as I have seen some do, in order to suggest the Bible is irrelevant to modern life and historically-bound.  The historical context of Scripture is extremely important to understanding the world I am called to serve in.  The problem is not that the 1st c. Palestine of the Gospels is so different from today.  The problem is that many don’t see how similar that period is to today.  When the Word reads you, it reveals itself as relevant to every age.

And so, in last Sunday’s Gospel, as I simply struggled to read a text without all my life concerns up front, I ran across a character who I believe is my doppelganger.  Nicodemus.  Nicodemus was well trained in the Scriptures, a Pharisee and member of the Jewish Ruling Council.  But he’s not angrily against Jesus.  He’s hearing something different in Jesus and is there to learn more.  He’s trying to “read Jesus.”  But the beauty of John 3 is that Jesus reads Nicodemus.  And in reading Nicodemus so well, Jesus is able to give him a whole new look at God.  For God so loved the world…

A God of love.  One who is all about saving us.  A Pharisee would have found that controversial, but not Nicodemus.  Quietly, indeed secretly, Nicodemus must have continued to follow Jesus, as he is the one who donates the myrrh and aloes for Jesus’ dead body.  While there are still many shades of gray on this Nicodemus character, I have to wonder as I read.  How did Nicodemus hear the news, three days later, that Jesus was risen?  Had he, at Jesus’ death, seen the God of love Jesus told him about in John 3:16?

We’ll never know, but that shouldn’t stop us from letting the text continue to read us.  I think Nicodemus left Jesus in John 3 surprised by Him.  When the text reads us, “surprise” is the word that best sums up what happens.  The Word of God is not a “tool” as so many well-meaning, but poorly informed, Christians want to make it.  It is a story.  It’s God’s story and He’s drawing you into it.  His Word is not yours to manipulate.  Rather, You are His to guide and steer through the Word.

So I’m starting to wonder if “Bible Study” is what we really ought to be doing in the Church.  If I go into the Scriptures looking for an answer to a question, it’s rarely a satisfying activity.  But when God reads me?  Well, that’s just the best thing in all the world.  It’s a great surprise.  A surprise too great for words.

The “template” by which western society (US and Western Europe) lives is the anger template.

And here’s the kicker.

We have no idea how to get out of all this anger.

Madison, WI, the capital city of my home state, may be “Ground Zero” for the anger of western society.  As I look at what is going on in Madison, it has gotten to the point where I really don’t care who is right or wrong anymore.  If all people can think to do is grab bullhorns and scream each other down, they don’t deserve to be listened to anymore.  (Let me praise them for their lack of originality.  Isn’t this what we always do?  How’s it really working for us)?  Each side may have good points to make.  Sadly, because they make them in the noisy ways they do, they aren’t worth the listening.  Shouted speech is not persuasive speech.  It only forces people to do whatever they have to to shut the shouter up.  The motto these days seems to be, “We’re gonna scream…until we get what we want!”  (Again, both “sides” need to consider how they have done this).

As a Christian, I see no need to enfranchise such angry immaturity.  That’s right…as a Christian.  The Bible’s love (agape) is not toleration.  If it were, Jesus’ cross and the love shown there makes absolutely no sense.  Indeed, because the Bible’s love is personified and defined at Christ’s cross, it is quite the opposite of the world’s toleration view of love.  God carried out His white hot anger over our sins there…on His Son.  Saved and forgiven by His blood, politically noisy Christians should ask themselves, “What do we really have to be angry about anymore?”  It would seem that all this “toleration” and “coexist” language has only magnified the anger.  That’s because all the bumper stickers and billboards and 24/7 newschannels, etc etc etc. only increase the noise, the shouting.  I don’t need a bumper sticker to tell me to COEXIST.  I need a Bible which reminds me to love others while I still confess that Jesus Christ alone is “the way, the truth, and the life.”  No one was ever saved through angry cries to tolerate and coexist.  The world is saved by God’s intolerance of sin, poured out on His Son rather than on you and me, who truly deserve it.

True faith does not live by the anger template.  True faith rejoices in silence before God.  As we live our lives out before God in our vocations, God gives us His words of love to nurture and support one another.  Part of that nurture is lovingly speaking the Law to one another to prevent sin.  The bigger part of that nurture is living the forgiveness of sins and being gracious to one another, despite our differences.  This is why I serve in the Church, because the Church at its best looks nothing like the angry political arenas of today’s world.  The Church is a people at peace in the forgiveness of sins…people who live in Christ.  Christ showed justifiable anger at the Temple and in other situations in the Gospels, but it wasn’t His “template,” His whole manner of living.  “Love,” salf-sacrificing, totally accountable, nitty-gritty, love was His template.

Perhaps every pastor who reads this post can relate to having counseled people who had a lot of anger in them.  If they can, they hopefully can agree to what I write.  Anger never builds up.  It always destroys.  It only gets short-term gains for those who practice it.  It always leads to long-term consequences.  It never allows for a vision that can see past one’s own nose.  Harbored too long, anger is always selfish.  Hence the Bible teaches us, “in your anger do not sin” (Eph. 4:26).  Anger may not be a sin in itself, but when it becomes the template, as it is for our society, it is sinful.  It already is.  And it will destroy us if we do not get some cooler heads.  Joining the OT prophets, John the Baptist, Christ Himself, and Martin Luther, hear a one word admontion, “Repent!”  All the great movements in history began with that word. 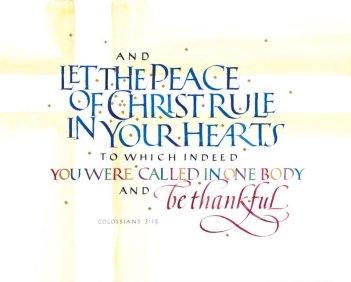 Repentance, forgiveness, peace, joy.  All these come from Christ alone.  While other religions promise such things, no other religion shows you a God who loves you enough to bear the world’s angry insults and die to save people who cannot save themselves.  Only the Christian message has the solution.  Would that pastors, people, all Christians, would show this noisy, angry world something truly better.  Because we have it.  We have the “one thing needful” (Luke 10:42).  We have Christ.

God help us Christians to show Christ’s love to an angry world and to bring peace to lives which, quite clearly, do not know any peace.